Today, we want to tell you a story. A story about Greece and its small pearls: its islands, its mountains, and its countryside. The places where Gods and legends were born, protagonists of humanity’s fate. The world of Gods and Heroes is often cruel; as cruel as the Aegean Sea, at the same time violent and impetuous, and calm and beautiful. 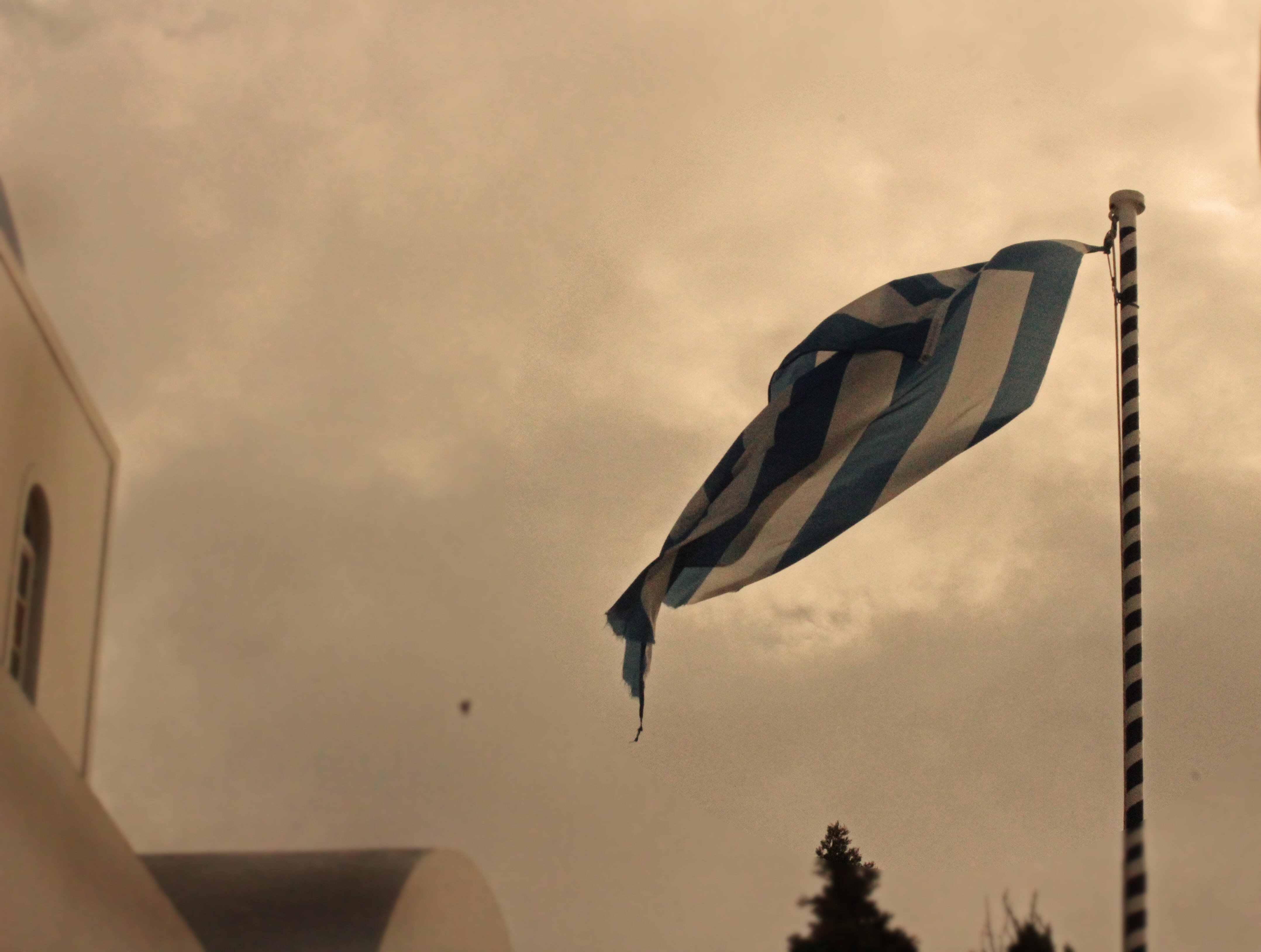 And here they are, in a morning that has just begun: the island of Santorini and its small capital Thera, with its typical white houses. Approaching slowly with a small boat the little harbor, you realize how that “snow-covered mountain” in the middle of the sea can be the beating heart of the island. And finally, you land.

Santorini. Known as “Sant’Irene” after the Venetian domination, subjugated by Ottomans, explored by Jesuits during the 16th century, it was dubbed the “Devil’s Island”. Nowadays, even more unusual and mysterious superstitions dominate the island, such as the existence of vampire creatures, Vroukolakes – a real obsession for the inhabitants. 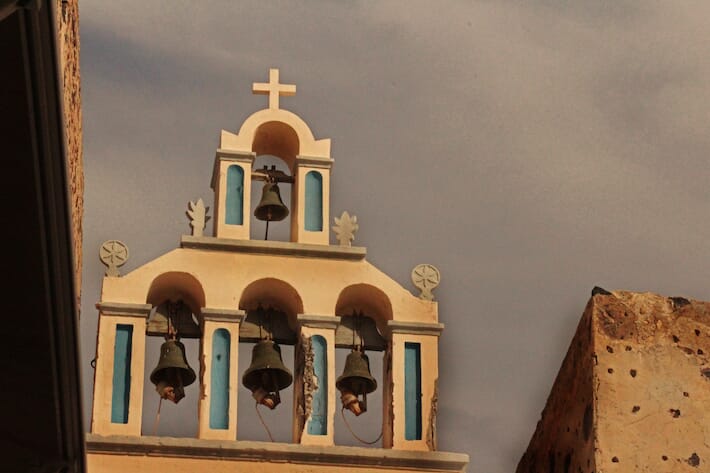 How is it possible that this “little jewel” of the Aegean may still have such a mysterious reputation today, given its continuous and festive gathering of tourists from all over the world? And indeed, a clamor of any nationality overwhelms you from your first steps on the harbor.

Boat trips, explorations throughout the island, visits to the coves and the most beautiful beaches. Impossible to resist to people promoting their tours, all for a really cheap price and exciting for everyone. 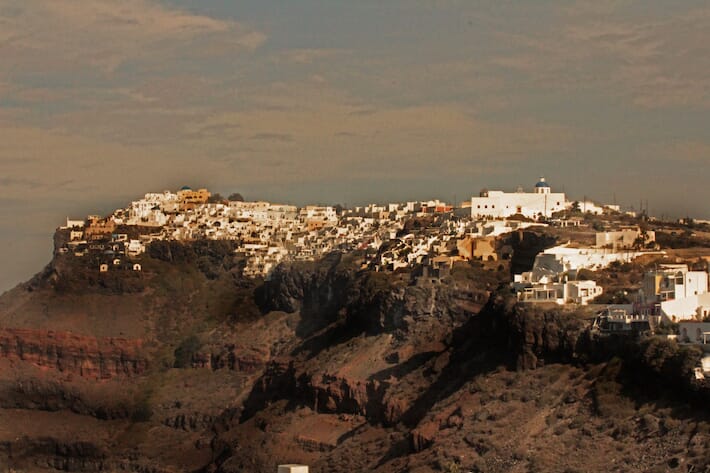 You may choose to climb up to Thera by cable car, a cheap and fast trip. Going up the impressive ridge, you realize that legends should be strongly influenced by the landscape, which looks so hostile. Santorini is a natural theater, a theatre vertiginous stage of steep cliffs and overhanging houses overlooking the gulf. It owes its characteristic crescent shape to the volcanic crater explosion on which it lies. For centuries, cataclysms, eruptions, earthquakes, characterized the life on the island, creating legends and an aura of mystery that convey an incredible charm.

In a few minutes, you are up, in a city that is alive since the early hours of the morning, white and clinging to the caldera. Not stopping at one of the many coffee shops, perhaps to enjoy a good coffee, could be hard; the smells of desserts and hot drinks are really inviting. But for now, leave the white town behind you and set off along the paved road. 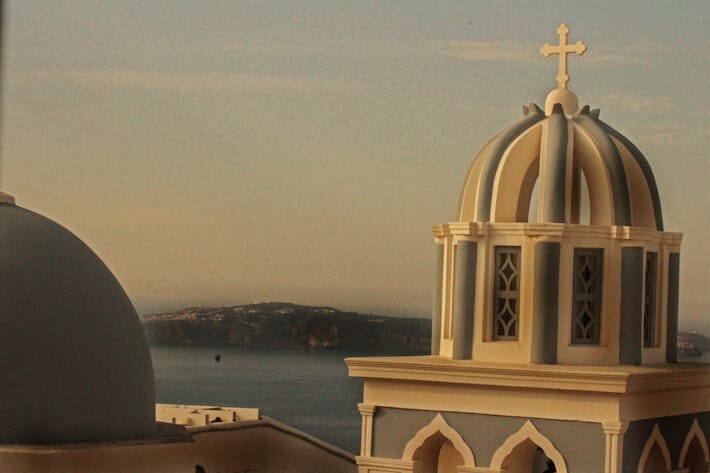 Walking above the caldera feels like flying. The landscape becomes more and more enchanting with each step, letting you be caressed by a sea breeze.

The road running along the overhang takes you to the village of Imerovigli, whose name is reminiscent of a fairy tale. And indeed, the stories of its inhabitants seem to be looking for you, even chasing you through the eyes of the few islanders that line the street, curious although being accustomed to the constant presence of tourists. Still, they keep attending to their daily activities: apparently careless, actually attentive to what happens, to their interrupted stillness. Santorini’s guests always return the portrait of a poor and industrious island, where idleness is banned; people start working as children, and women are harder than men. 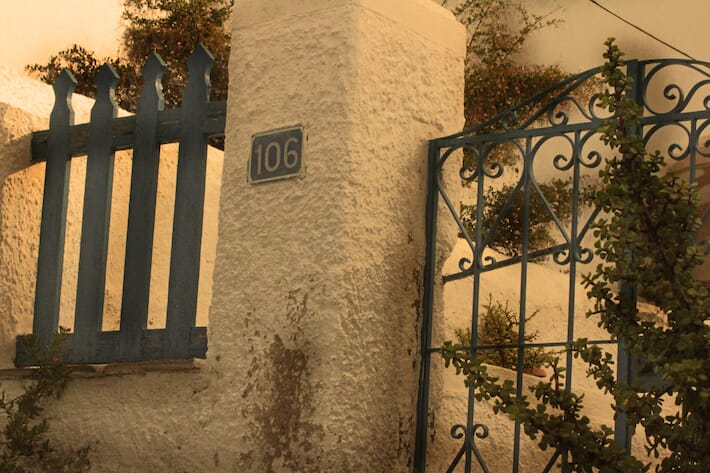 Your walk continues and the day begins to get warm along the caldera. Stop at civic 106. In the surroundings, there is no street number, and that gate with a bright blue fence may catch your attention. Take a peek inside. A plane noise will probably intrigue you as you see a head bent and busy to work. It seems that you discovered one of those hardworking men from the past. 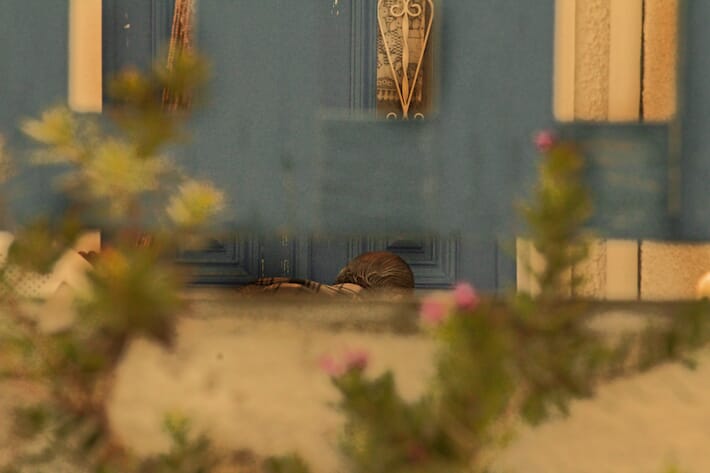 With just a moment of hesitation, he will probably notice you. A man, maybe in his sixties, with his skin darkened by the sun, whose hands tell how much he has worked during his life, and that he has never abandoned his land.

You may say “Kalimera“, and he will welcome you inside. He’ll make you understand that he gives you permission to take a photoshoot of his house: he wants you to enter his world. After a hard work on his house door, now he can even enjoy a cigarette, which seems to be his only luxury. And he poses himself there, in front of your camera, proud and with great dignity, in a certain sense wanting to recount himself. When you decide to leave him, you’ll try to take his hand, but he’ll seem reluctant to give it to you. His gestures will say: “I’m dirty”. Yet, you won’t refuse to take his hand, as his is the warmth of this land. 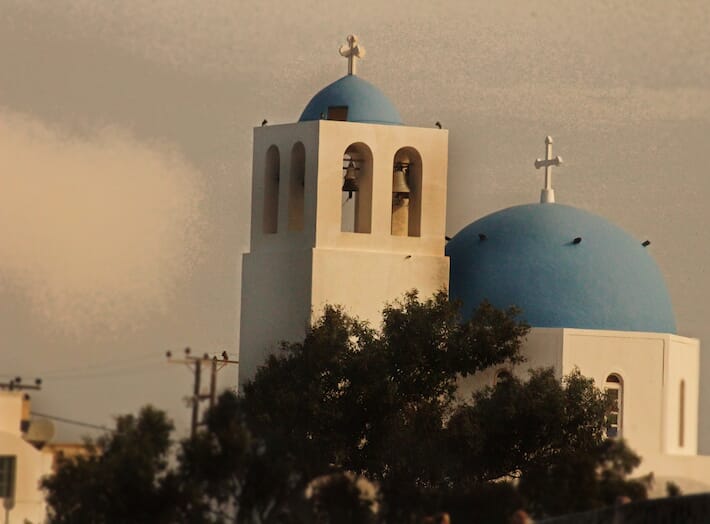 Now, after leaving such a moving house, you are at the gates of Imerovigli, also candid and quiet, with little shops everywhere, and the blue and white domes to dominate the panorama. A Greek flag waves proudly in the wind.

Before returning, try to lean out of the ridge. 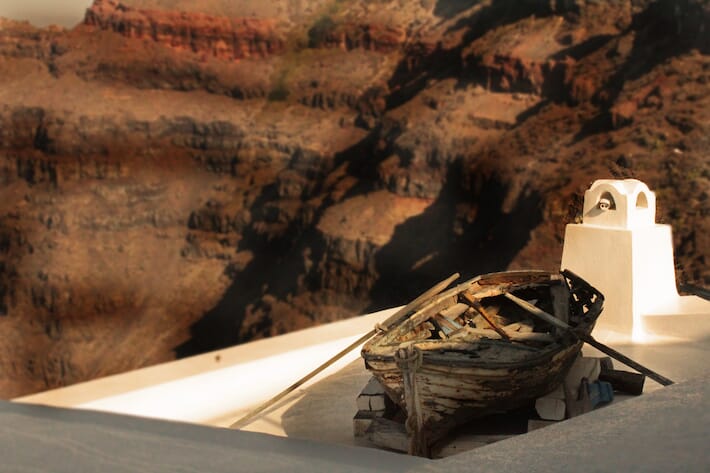 The first thing that will probably amaze you could be an old rowing boat sitting on a roof; but remember: you are in Santorini, and noticing something bizarre should not be so strange. You’re looking at the isolated town of Oia, famous for its scenic restaurants. Lauda, at the Andronis Hotel, is one of these, renowned for its breathtaking location, its elegance, as well as its typically Greek cuisine. Enjoying a good meal and a glass of wine here, perhaps in the light of the sunset, it’s a unique experience.

During summer, Oia’s nightlife is a must: young people love to improvise parties and dance outdoors, probably admiring the famous Windmill, a symbol for Oia and the whole island.

Between Mundanity and Spirituality 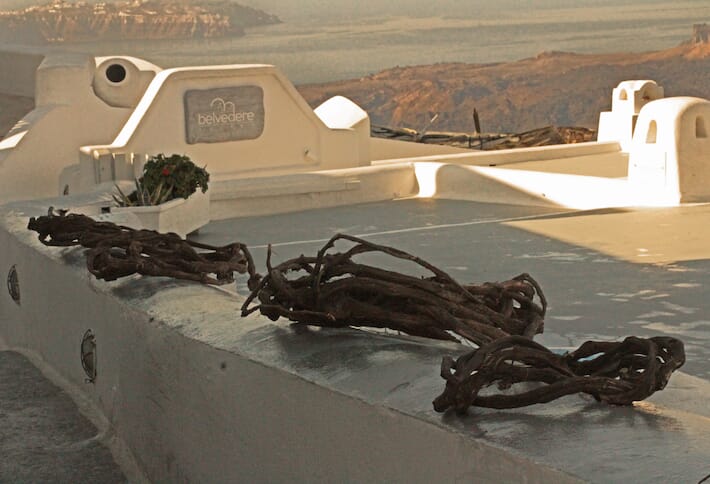 Another half hour of walking and you are back among the climbs of Thera.

This place really seems to be on another planet for its touristic clamor. Restaurants’ owners invite you to enter, to sip a cocktail and enjoy the breathtaking view of the sea.

And the Belvedere terrace is a delightful stop. Its name says it all: come here to enjoy a fresh fruit-shake or a glass of Ouzo while sitting on a wicker sofa and overlooking a beautiful landscape. It almost seems to be a spectator, comfortably seated on the “roof of the world”. And if you feel a bit of envy when you look out from the balcony, do not worry: Thera is the perfect place for villas with swimming pools, perched on the mountainside 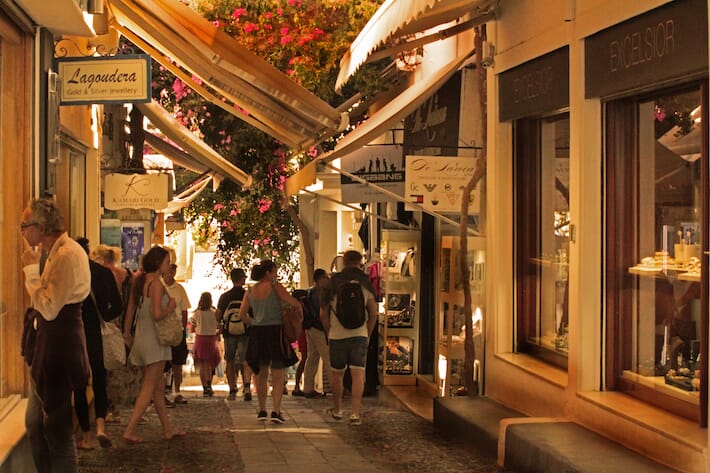 Wandering through the blue streets and climbing the narrow stairs can be really fun, though not accessible to everyone. Everywhere there are souvenir shops and jewellers. And salesmen eager to show their goods. A constant party atmosphere echoes in the air.

The most mundane aspect of the island can often distract from its cultural itineraries. 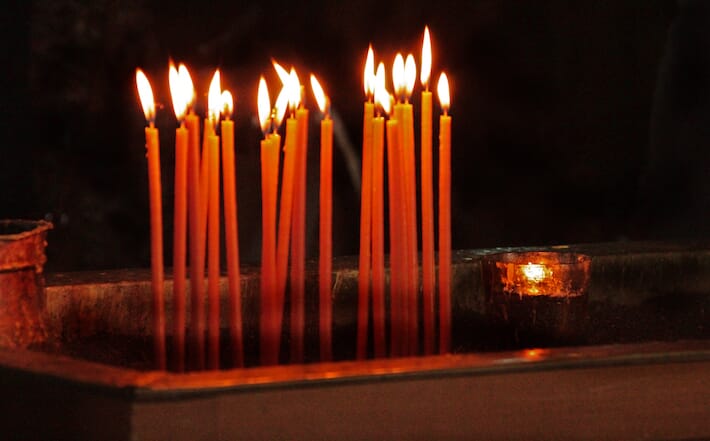 Religion is particularly felt: in the main square of Thera, the Orthodox Cathedral enchants with its frescoes and colorful mosaics, in the light of votive candles, wrapped in a faint smell of incense.

And given the time, a stop to taste the typical sweets of the famous Iriana Cafè, exactly in front of the church, is a must.

The True Experience of Santorini 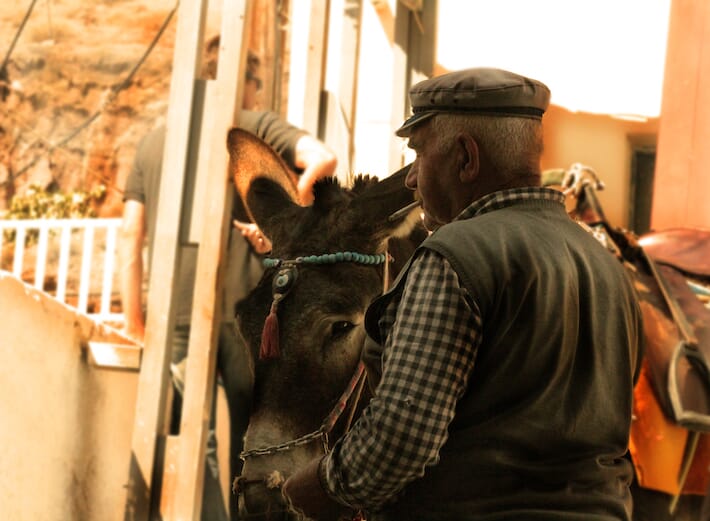 When you decide to return to the cable car, you may hear an unusual noise that pushes you to browse around a bit more. Behind the old market, male voices get louder: it’s the donkeys’ departure station. The animals are dressed with typical harnesses, ready to take you up to the small capital. They are one of the most characteristic attractions of the island, loved by adults and kids as well. Going up on a donkey’s back is the real souvenir from Santorini. 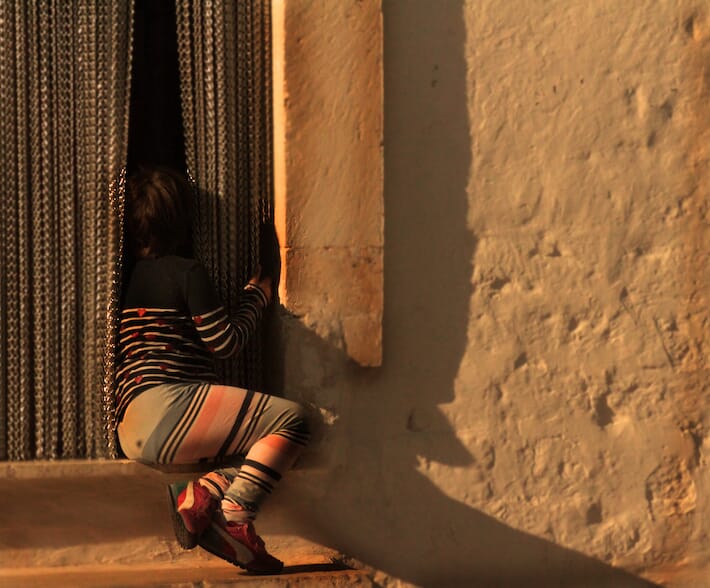 This island is a closet for memories. Although it became one of mass tourism’s destinations, it retains an arcane charm, a mysterious enchantment, regardless of the postcard image that we’re accustomed to. It resists, indifferent to the rowdy groups that cruise ships land in droves, and it lurks behind the nightclubs and jewellers. It’s still rich in traditions that sometimes we forget.

And as you leave the island, you should not be surprised to see the shadow of a vampire emerge from the caldera, coming to you like an old friend.

Now you are ready for the next destination.