There are events in the world of high gastronomy that not only value chefs, restaurateurs and territory, but they also become expressions of beauty. The tenth edition of Versilia Gourmet Restaurant Guide 2019/20 has been celebrated with the annual Gala Dinner that this year took place in a very elegant setting: the Bagno Ariston, also known as Ariston Mare, on the Lungomare of Lido di Camaiore, one of the most beautiful bathing establishments on the coast of Tuscany. The perfect occasion to discover the best restaurants in Versilia. 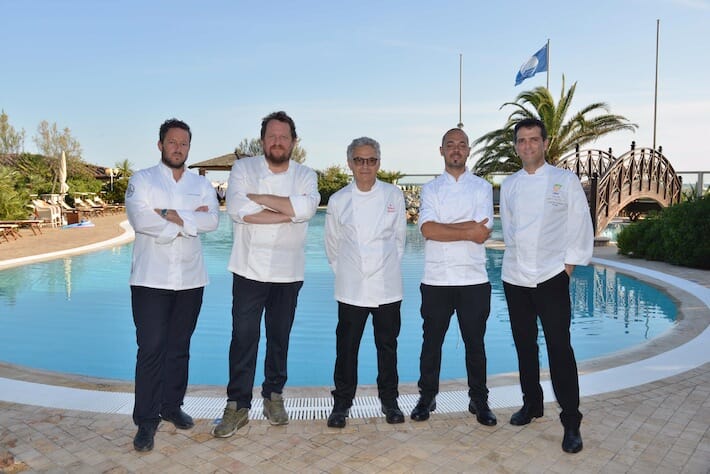 Best Restaurants in Versilia – The Chefs of Versilia Gourmet 2019/20

Versilia Gourmet has been organized and created by Gianluca Domenici, editor in chief of the Guide. He’s a “Versiliese doc”, very experienced and passionate about restaurants and lifestyle. Gianluca is very much appreciated in the restaurants entourage because of his charming  ways, his sense of humor, and his big knowledge of food businesses. The same knowledge that he poured into the Guida Ristoranti: more than 400 restaurants were examined between Camaiore, Forte dei Marmi, Lido di Camaiore, Marina di Pietrasanta, Massarosa, Pietrasanta, Seravezza, Stazzema, Torre del Lago, and Viareggio.

The celebratory evening has been a great turning point to get to know the protagonists of the Versiliese food & beverage scene and the places not to be missed in Summer 2019.

Starting from the Ariston and its Resident Chef, Angelo Torcigliani, with his crew from Il Merlo. It was him who delighted guests with a magical sunset aperitif, right on the pool side.

The official sponsor of the Guide 2019/2020 was yet again the prestigious Maison du Champagne A. Bergère, with the practical support of the Champagne A. Bergére Italia importers Massimo Fabiani and Flaviano Lenzi. The Perfect Party Catering of Pietrasanta (LU) took care about the logistics and event services, while the professional sommeliers of the Delegazione F.I.S.A.R. Versilia served the wine paired with the dishes.

The Best Restaurants in Versilia 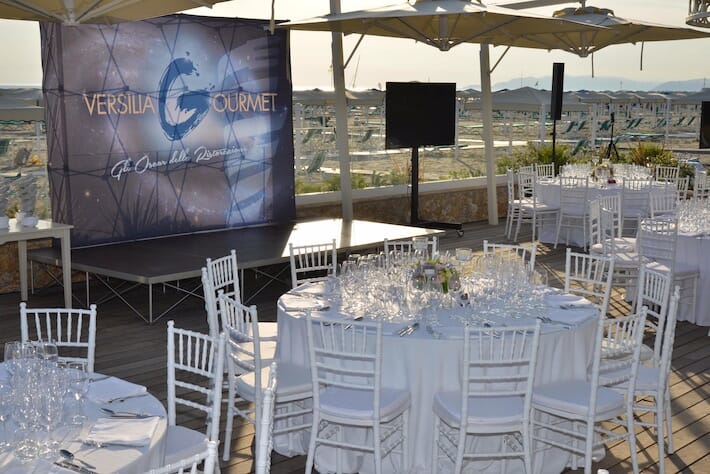 Here are the restaurants that you shouldn’t miss in Versilia this summer, all tested by us during the Versilia Gourmet Gala Dinner.

First class delicacies that you can choose at the counter and then eat at the chic bistrot right behind it. Michelangelo Masoni’s butcher’s shop becomes uber-modern without losing the prime quality of the ingredients.

Located on the beach with a lovely sea view, Il Merlo delights its guests with lovely dishes and glasses of wine and champagne.

Luca Landi of the Lunasia restaurant in Viareggio greets his guests in the fabulous Hotel Plaza e de Russie with the contemporary cuisine that won him a Michelin star. The highlight? Pan-seared blue fish, herbs cream, cereals, bread and garlic. Better if combined with a Ten-Year Label Magnum Selection Brut Champagne A. Bergère.

Andrea Papa of the Romano restaurant in Viareggio paints his dishes as if they were Impressionist canvas. You should definitely try his marinated Ombrina with beluga lentils, cuttlefish, and fish soup, paired with a Rosato Le Cicale 2017 by Fattoria Sardi.

Fabrizio Girasoli of the Butterfly restaurant in Lucca boast a story if successes that earned him and his restaurant immersed in the Lucchese countryside a Michelin star. The hit of the summer is a main course: Risotto Acquerello, cauliflower, Cetara anchovies, and black lime, to be paired with a Chardonnay 2016 by Terre di Sillabo.

Andrea Mattei of the Bistrot restaurant in Forte dei Marmi brings on the tradition of love for the territory and taste for the details of the Vaiani family. The cherry on top is a second course: Apuane piglet with grilled zucchini and elder flowers, paired with a Tenuta di Valgiano 2015. 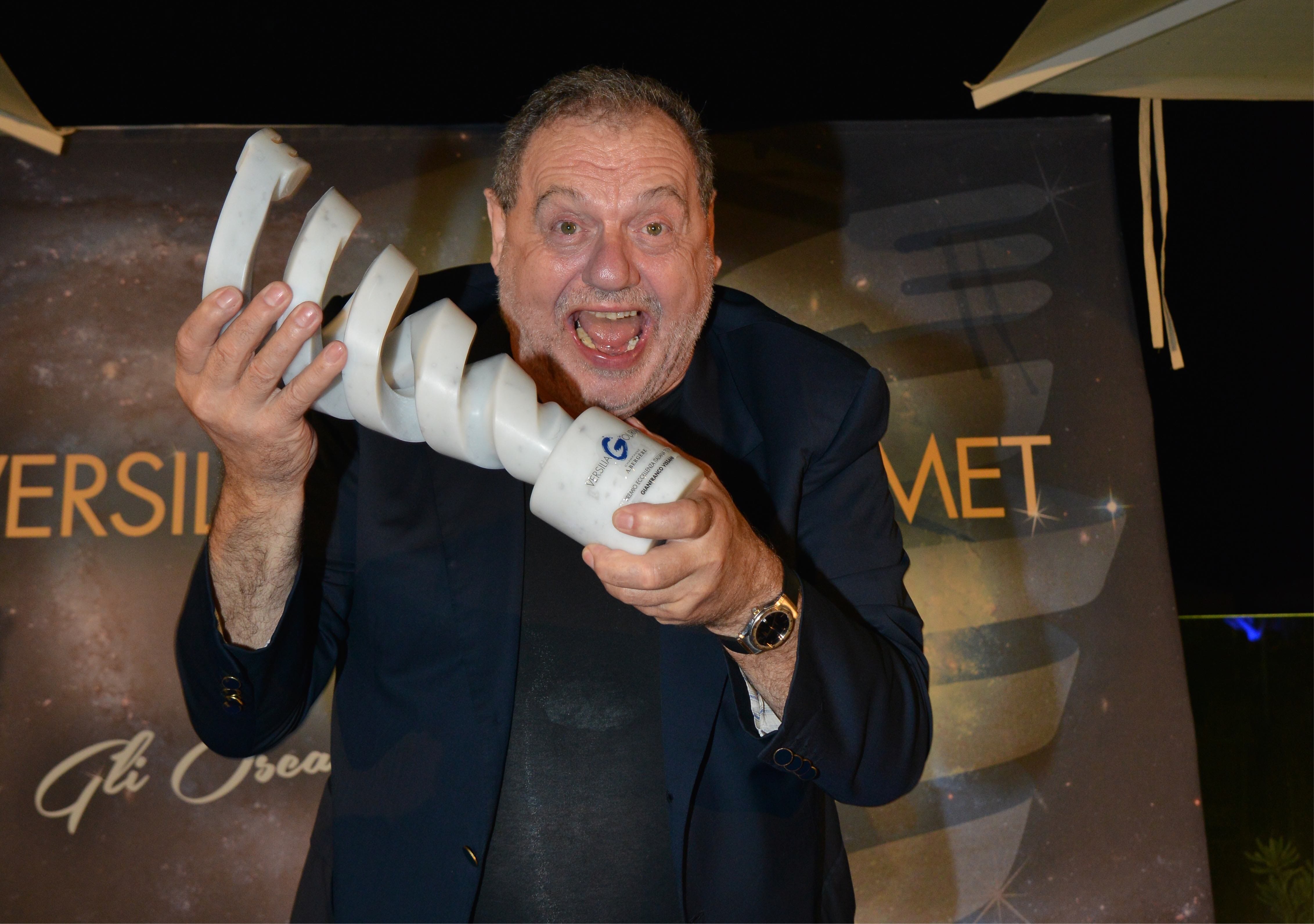 Like every year, the prizes have been awarded to five categories: Best Chef, Best Maître, Career Award, Restaurant of the Year, Italian Excellence.

The price was a marble sculpture representing fork and knife made by the Azienda Artigianale Lara Landi of Pietrasanta and designed by Rino D’Anna. 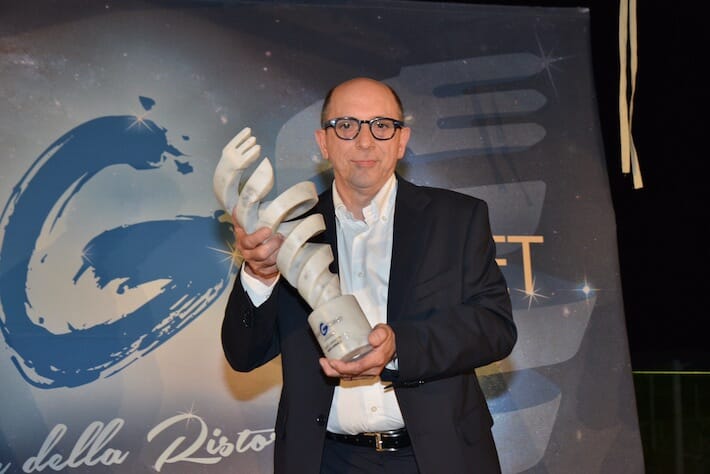 Guido Lombardi from the Da Giorgio restaurant in Viareggio, for the high standards carried forward for generations to represent the real Italian seafood cuisine. 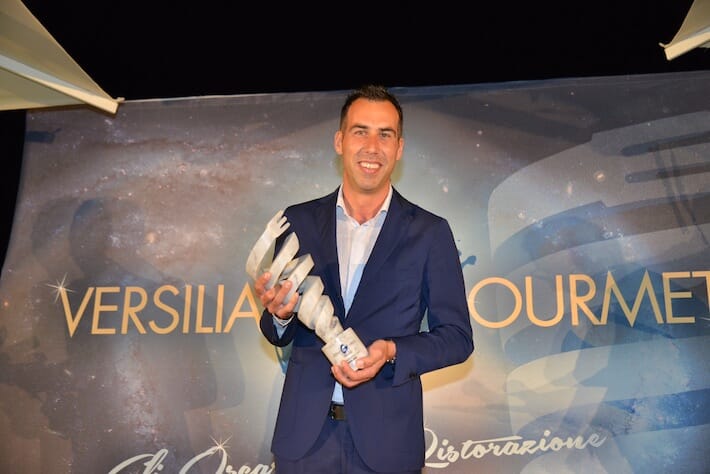 Marco Vaiani, for the elegant service and the attention reserved to his clients in all his restaurants managed with his brother Davide in Forte dei Marmi. 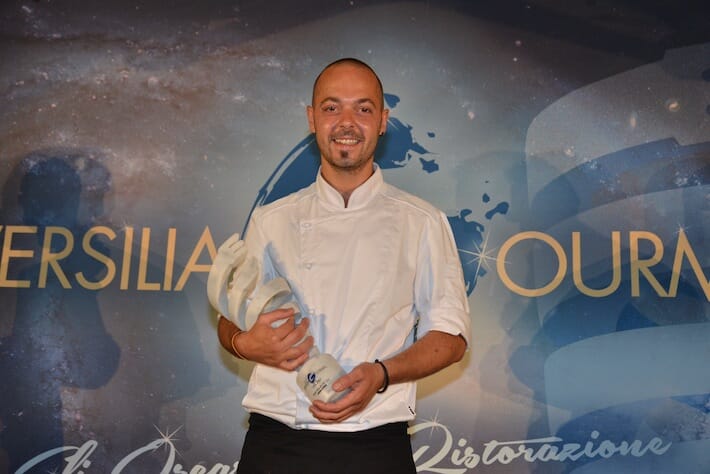 Andrea Papa of the Romano restaurant in Viareggio, for his personal interpretation of sea food cooking.

Gaio Giannelli’s Pozzo di Bugia restaurant in Querceta, for the great atmosphere, the glamour, and the kindness of the owner.

To those who have missed this Gala and want to have more information about restaurants in Versilia, you may consult the Guida Versilia Gourmet Ristoranti 2019/20, available in every book shop.