You have time until June 25th to visit the exhibition Post Zang Tumb Tuuum. Art Life Politics: Italia 1918–1943 at Fondazione Prada. You’ll explore the art and culture system during the two decades between the two World Wars. It won’t be a mere excursion into Futurism, yet an analysis on the historical, political, and social context that created the most prominent artistic group of that era. From Futurism to Metaphysics, from the Valori Plastici to Italian contemporary art.

The starting point was the research on documents and historical photos that unveiled the social and political context where the artworks were created, showed, and interpreted by the public of the period. Thanks to the photographic reproductions that are on show at Fondazione Prada, you’ll be able to virtually visit the artists’ ateliers, the private collections, and also the great Expo spaces, featuring those of Rome and Venice.

Moreover, the exhibit dedicates a particular focus to those politicians, intellectuals, thinkers, and writers who gave aid to the ideological radicalization of that time, contextualizing their work with their artistic influence.

The horizon then widens on design, with the first production of haute furnishing, and on architecture, which reflected the Italian fascist transformation through buildings and town plans.

This exhibit features more than 600 works between paintings, sculptures, drawings, and photographs, with the addition of posters and architectonic plans designed by more than 100 artists. In Post Zang Tumb Tuuum. Art Life Politics: Italia 1918-1943 objects are introduced through historical images, original publications, letters, magazines, press reviews, and personal photos, all aiming to create a thoroughly immersive journey into the fascist period.

Beyond the “classical” exhibit, and inside the Foundation’s Movie Theatre, 29 complete newsreels distributed in Italy between 10929 and 1941, are projected, which have been recovered and selected in collaboration with Istituto Luce – Cinecittà. A real dive into the most important cultural events of that era.

BETWEEN RURALISM AND VANGUARDISM

Ruralism and Fordism, modern Rationalism and Vanguardism: it all merges into the gran autarchic narration of the regime. After the Liberty boom, in fact, art went to being thoroughly Italian, with its awards and academies. A call to order that was difficult – or better, impossible – to avoid.

The beauty of Sironi’s works in the first rooms is astounding, while De Pisis’ indifference to the main ideology is like a breath of fresh air; just like Fausto Pirandello, Capogrossi, and Morandi’s works, the latter now considered as an anti-fascism champion. Room after room, the exhibit recounts the epic of fascism but also its everyday life, the small intrigues of the artists, the magazines, the instruments to reach an easy consent.

THE BOND BETWEEN ART AND HISTORY

Something changes in the last room. Even before Maccaris’s jokes on Mussolini, and before Cagli and Carpi’s drawings of the lagers. It’s the work of the youngest generations (Emilio Vedova) who have grown up during the regime. With a certain malice, Celant shows a portrait of young Alicata by Guttuso, remembering the epigram: “Ali, Alicata. Salinari, sali”. In short, new servilities await.

Post Zang Tumb Tuuum. Art Life Politics: Italia 1918–1943 may be interpreted as a call back to democracy’s values, sometimes rickety but surely avoidant of those very servilities and self-censorship.

A project that comes from New York 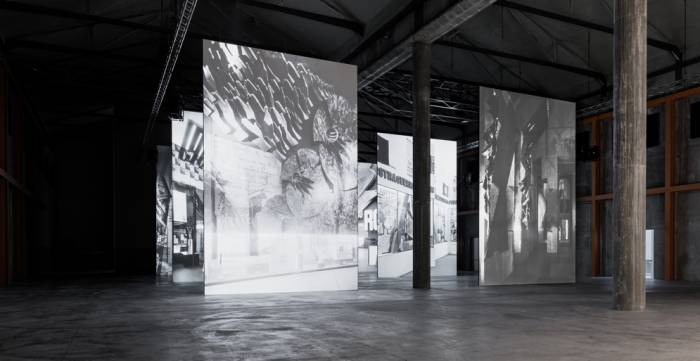 The exhibit project belongs to New York’s Studio 2×4, that worked in tight collaboration with the curator to express the strong main theme. In fact, Celant’s starting point has been the book “Le partage du sensible. Esthétique et politique” by Jacques Rancière (2000), A reading that takes note of the strict connection between art and social context.

The floor texture changes while getting close to some of the works, as to suggest the entrance in another dimension. Reconstructions, photographs, documents, drawings, posters, and furnishing: everything aims to convey the aura of that period. When culture was used by fascism as flexible, adaptable, modern tool. A practical mean to “re-do” Italians, shaping their experience of the world.

That’s why, alongside the works of Giacomo Balla, Carlo Carrà, Giorgio De Chirico, Fortunato Depero, Mario Sironi, Adolfo Wildt, Arturo Martini or Piero Portaluppi, are also exposed the photographs from the Expos of those times, with thematic focuses dedicated to intellectuals, writers, and thinkers of that era, such as Margherita Sarfatti, Alberto Moravia, Carlo Levi, Antonio Gramsci. All to put together a convincing and highly valuable meditation that invites the visitors to reflect on the tight bond between art and history.