Spanish people will always be remembered as an ambitious population that craved to be near the sea. One example of this constant need? Madrid, a city that is hundreds of kilometres from the sea, has its own lighthouse. To discover Madrid means to dive into its millennial history and in its ever-present charm, breathing in the pride of a territory that never ceased to search for excellence and exceptionality. 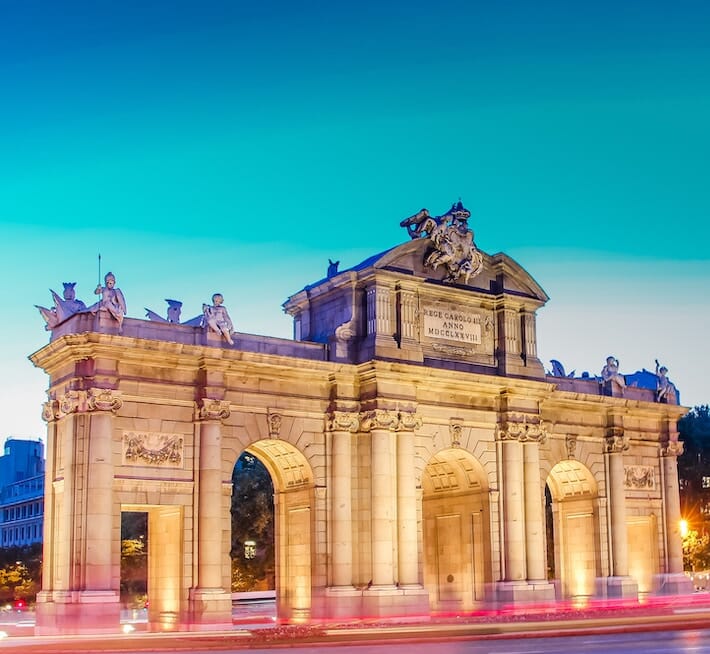 Discover Madrid and Its Surroundings: The Weekend Guide (Ph. by Tania Fernandez on Unsplash)

Pairing Madrid with only one sensation is basically impossible. A European city with an Arab heart, an uber-modern metropolis and yet one of the greenest cities after Stockholm (yet Madrid stands in the middle of a semi-desert land, and not among forests as the Swedish capital does). A place that hosts people of every social background, but desn’t forget its noble origins: in a span of 100 kilometres from the Puerta del Sol, there’re as much as 11 royal palaces.

To discover Madrid not only means to get lost in an ever-bustling city, but also to explore its surroundings made of vertiginous mountain panoramas, hidden artistic treasures, and astonishing local delicacies. Between wineries and cathedrals, sky bars and tennis tournaments, here’s The Italian Eye weekend guide to Madrid. 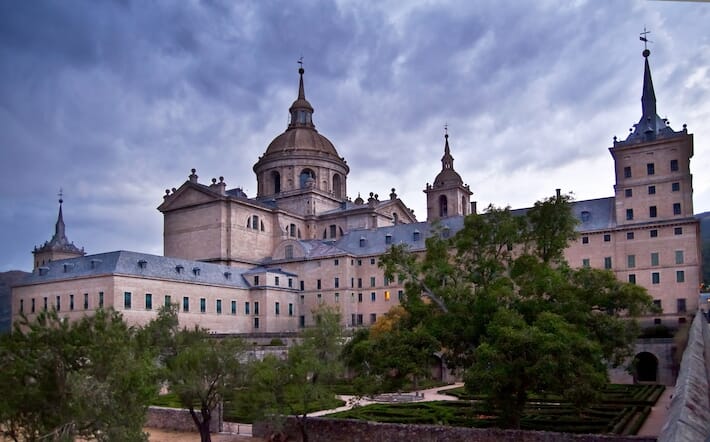 Discover Madrid and Its Surroundings: The Weekend Guide – El Escorial

Our adventure starts from a site that encloses a large slice of Madrid’s history. Royal palace, library, museum, university, hospital, monastery, basilica: El Escorial has been and still is all of this and so much more.

Located in San Lorenzo de El Escorial and dedicated to Saint Lorenzo in honor of the Spanish victory of San Quentin against the French army on August 10 1557, this gargantuan palace was built by king Philip II as a family mausoleum. During the century, the crypt expanded to accommodate other rulers, resulting in a pantheon that hosts 26 Spanish monarchs’ tombs.

The construction of El Escorial started in 1563 with architect Juan Bautista de Toledo, who was known as one of Michelangelo’s pupils in Rome, and ended in 1584 under Juan de Herrera. It was Herrera who created the unmistakable style of the building, also defined as Herrerian, characterized by few austere decorations and geometric severity. An architecture that reflected the figure of Philip II, a man of solid moral principles who didn’t grant any luxury to his court and who pretended the maximum efficacy from his reign, earning himself the appellative of bureaucrat king.

A Place of Hidden Beauties 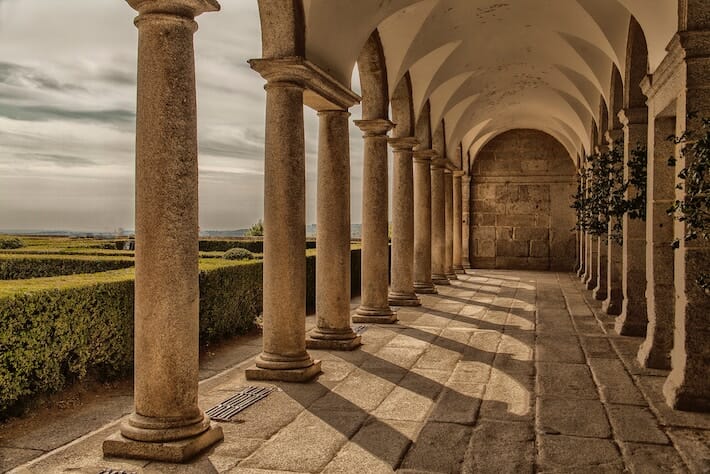 Discover Madrid and Its Surroundings: The Weekend Guide – El Escorial (Ph. by Guillermo Álvarez on Unsplash)

With its 11 kilometers of length, after its construction, El Escorial remained for years the biggest building in all Europe, and its proportions still remain astounding even today.

The scrupulosity of its architecture is also visible in the philosophical division into four focal areas: a residencies, symbolizing rest; a school, dedicated to studies; a library, to exercise reason; and a church, to glorify faith.

Four very different sections, and yet all of them host artistic wonders: from Benvenuto Cellini’s cross and Pellegrino Tibaldi’s fresco in the church, to an enormous cartography collection in the library, with maps of the African and American continents that date back to centuries when those territories where still largely unexplored.

Right next to El Escorial, there’s a small gem you shouldn’t miss: the Real Coliseo de Carlos III. This delightful Italian-like was commissioned by king Charles III to give new life to the Spanish theatrical scene. With its 340 seats and a U-shaped plant, the theatre still hosts operas, dramas, and dance shows. A detail you should take a snap of: the imposing chandelier, manufactured by the Real Fábrica de Cristales de La Granja.

If you still want to gaze at El Escorial from a distance, you should stop for lunch at the Real Club De Golf La Herrería. The Golf Club’s restaurant is public, and it serves some local specialties such as cocido madrileño (stewed meat with chickpeas), the arroz con boletus (porcini mushrooms risotto), and the grilled codfish.

And if you’re looking for the perfect Instagram spot, try to find the one where you can catch a glimpse of Philip’s chair right inside El Escorial. Wow-effect guaranteed. 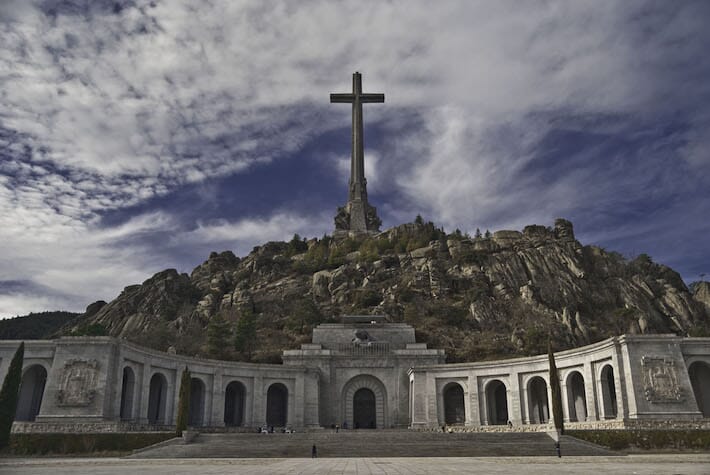 From modern to contemporary history. Heading north from El Escorial, you’ll soon encounter a giant cross over a neo-Herrerian monument. This is Valle del Los Caídos, the “fallen’s valley”, and that’s the monument built Francisco Franco to commemorate the over 30 thousand people who lost their lives during the Spanish Civil War. Franco himself was buried here in 1975 on his own will. He had always stated that being close to the royals in El Escorial was what he deserved.

With 150 meters of height, the cross that stands above the monumental complex of the Basílica de la Santa Cruz del Valle de los Caídos is the highest Christian cross in the world.

WINERIES’ TOUR IN THE AFTERNOON

After all this culture, it’s time to get back to mundane pleasures. This part of Madrid’s territory is perfect for a winery tour, even if choosing among them won’t be easy: there’re 44 wineries in this region.

The continental climate and the high thermic excursion between day and night make the grapes higher in polyphenols and tannins, while the high temperatures create wines with an elevated alcohol rate.

Three are the main sub-zones where to taste great local wines: Arganda, at 600 meters of height, Navalcarnero, and San Martin de Valdeiglesias, next to the mountains.

Among the wines that you must try: Grego by Vinos Jeromín, an intense blend of Tempranillo and Syrah from Arganda, and the legant Tierra Calma and Las Moradas, both from San Martin and both from Garnacha grapes.

DINING BETWEEN SUNSET AND SKYLINE 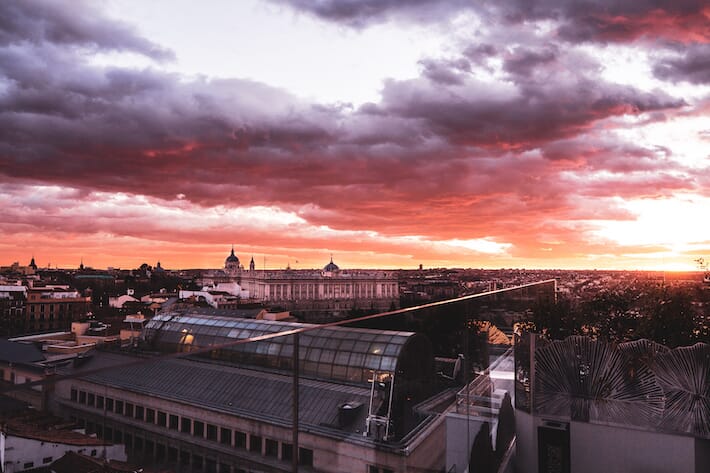 Back to Madrid, if you’re looking for the perfect spot for a sunset picture, here’s the place: Debod’s Temple, and Egyptian marvel from Aswan rebuilt in the middle of the city, just a few steps from Plaza de España.

And if you still want to remain on the spectacular genre for dinner, don’t head far. Located right in from the Plaza, the VP Plaza España Design hotel hosts the vertiginous Ginkgo Sky Bar, one of the most buzzed about sky bars of the city. The Asian-Mediterranean fusion cuisine spans from grilled oysters to tempura, all to be paired by the hotels’ signature cocktails.

Fancy staying at this marvellous hotel for the night? Then choose one of the 214 rooms of the VP Plaza España, and grant yourself some 5-star comfort and breath-taking views. 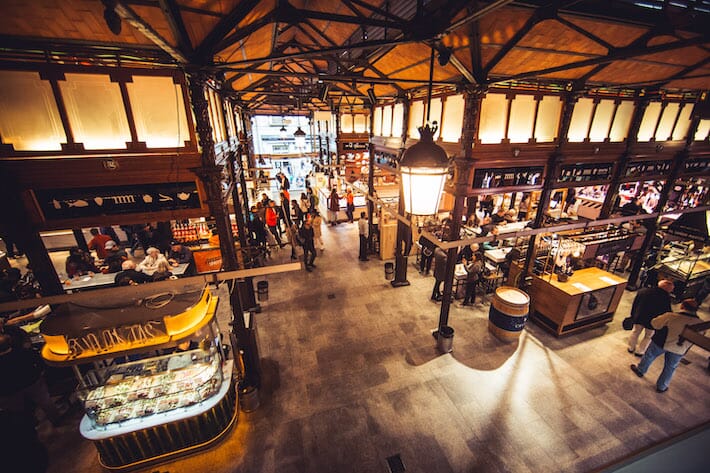 A visit to the Spanish capital has to begin from El Madrid de los Austrias, the bombastic name of the ancient city center. Start from Plaza Mayor, the most central square of all, completely surrounded by buildings and with as much as 237 balconies facing. From here, you’ll easily reach the Mercado de San Miguel, the indoor market with the iconic wrought iron structure that dates back to 1916. Stop at any of the market’s stalls and be inebriated by dozens of dainties, tapas, local cheese, jamon, olives, and even fresh oysters. 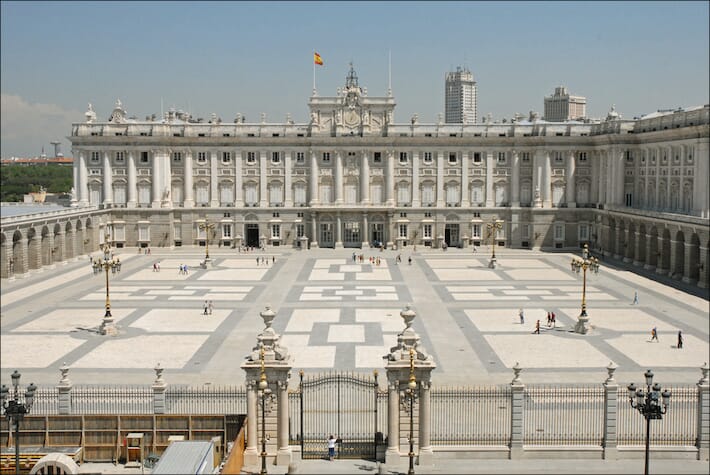 Discover Madrid and Its Surroundings: The Weekend Guide – Royal Palace

Before lunch, you must pay a visit to the official residence of the Spanish monarchy: the Royal Palaze. With more than 3000 rooms and a surface of 135 thousand square meters, this is one of the biggest royal palaces in Europe. Just like its dimensions, even its architectonic influences are vast, going from Baroque to Neoclassic, embracing botanic landscaping in Campo del Moro and sculptural in the Jardines de Sabatini and Plaza de la Armería.

Tiepolo, Raffaello and Goya are only a few of the artists whose masterpieces grace the Palace’s halls. And one room stands out among all: the Salón del Trono, a Rococò fantasy guarded by four Venetian golden lions.

Lunch in Madrid: Tradition or Contemporaneity?

Having lunch in Madrid means having thousands of options to choose from. If you feel like trying the Spanish cuisine reinvented with a contemporary twist, our bid is on La Huerta de Tudela. Chef Riccardo Gil has a special eye for vegetarian and vegan dishes, having reserved a whole menu to them, and even all the other specialties in his restaurant feature local ingredients and a thorough respect of Madrid’s cuisine. The cherry on top comes from the wicker chairs contrasting with the velvet sofas, and the walls that alternate coatings and stones, creating an environment that seems to mix the atmosphere of a bodega to that of a starred restaurant.

However, if you feel like getting to the – literal – origins of the restaurants’ history, the answer in only one: Botín, the oldest restaurant in the world. Founded in 1725, this incomparable place entered the Guinness World Records for its unmatched history of high service and delicious cuisine. The environment is Spanish tradition at its best, and the dishes, starting from the suckling pig, speak about distant eras as much as of familiar flavors. In one word: an institution. 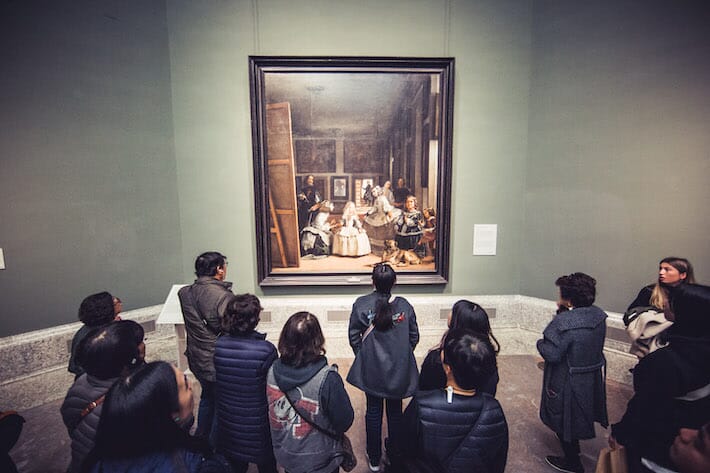 Once the appetite is satisfied, it’s time for a visit to another Spanish cornerstone: El Prado Museum, one of the most famous art galleries in the world.

From Mantegna to Hieronymus Bosch, from Goya to Tiepolo, from Rembrandt to Velasquez, passing by Rubens, El Greco, Tiziano, and Caravaggio. The art of the gratest European geniuses is held here, together with sculptures, drawings, printings, and even jewels, the so-called Dolphin’s Treasure king Philip V. Take all the time you need to visit this art temple: masterpieces don’t have a schedule.

Coming out of El Prado, if you feel like taking a walk to keep contemplating those astonishing pictures, you should head to Las Letras neighborhood. Named the “Literary Neighborhood” because of the many writers and poets who inhabit it, this place is perfect to get lost among its small alleys full of cafes and boutiques. Better if you’re still wandering between enchantment and reality.

Dining in Madrid: Get Your Flamenco On 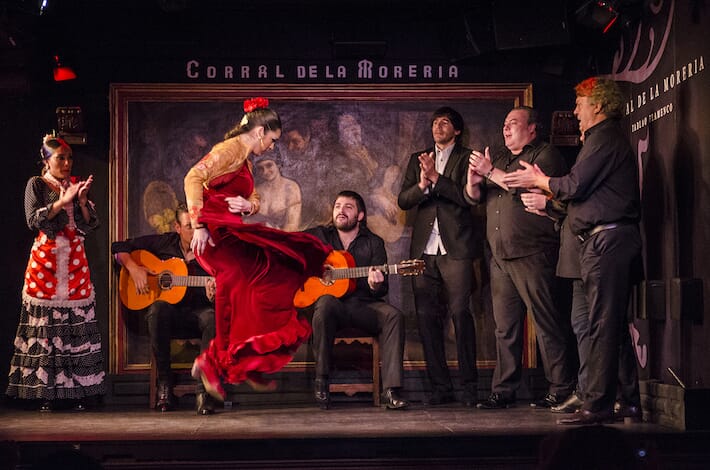 Nothing says “Spain” such as a night of passionate flamenco. One of the most spectacular and historic shows in town is that of Corral de la Moreria. It is considered the best flamenco tablao in town, and has even been named “flamenco’s Cathedral”. Here you may savor an amazing dinner surrounded by international flamenco artists, while the kitchen serves gourmet dishes.

And, if after all this dancing, you feel like the night is still young, head to Calle de Echegaray and grab a drink at Salmon Guru. Refined cocktails, a funky environment and an atmosphere that reminds of a weird Hollywood: the perfect synthesis of that desire to dream and have fun that only Madrid can transmit.

One Reason More to Visit Madrid 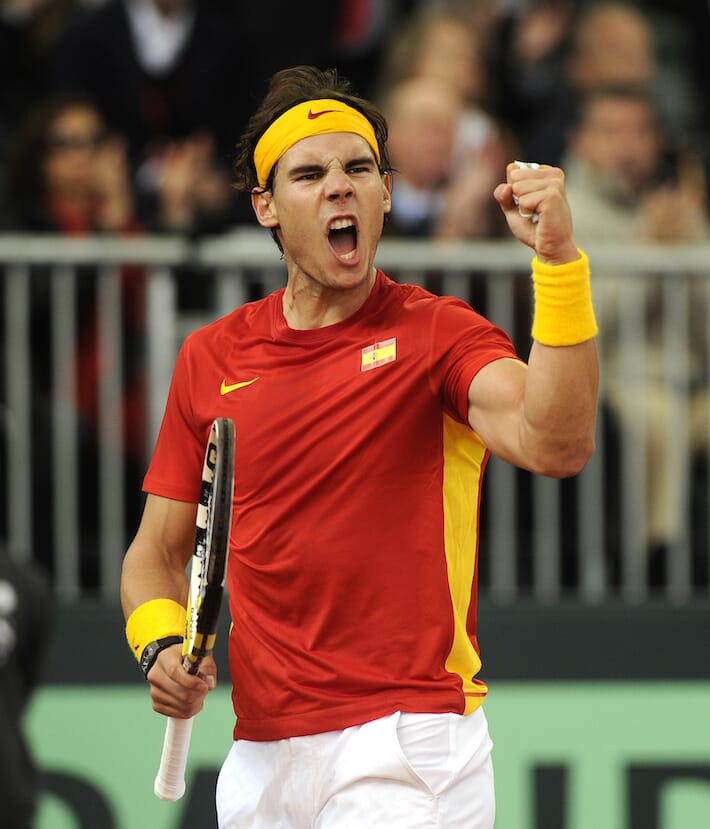 If you ever needed one reason more to visit Madrid, here it is. Se mai ci fosse bisogno di un motivo in più per visitare Madrid, eccovelo servito. From 18 to 24 November 2019 the Davis Cup by Rakuten Finals will be held in Madrid. The tennis tournament will see 18 nations battle on the three fields of La Caja Mágica. Why Madrid? In the words of David Haggerty, President of the International Tennis Federation: ““We are delighted to be bringing the 2019 Davis Cup Finals to Madrid. The city is a fitting location to stage the highest quality tennis and great entertainment for thousands of fans from all over the world. We look forward to working with the city to realise our ambitions of elevating the Davis Cup to a new level.”